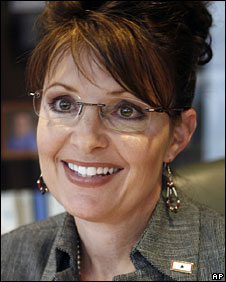 McCain announced his running-mate today and it’s Sarah Palin, Governor of Alaska. So being an auto loan site, we wanted to know what kind of car Palin drives.

With no personal driver, Palin drives herself around in a Chevy Suburban. About a month ago, Palin was stopped at a red light when a man rear-ended her, reports Wonkette.com.
The man who caused the accident has a prior record of speeding tickets and is also a certified EMT. Governor Palin was not injured in the accident. Her Suburban bumped the car in front of her, and that car bumped another one. In total, four cars were involved in this minor accident.
Governor Palin’s Chevy Suburban tops out at an MSRP of $50,405. With a 20% down payment of $10,081 and a 6.5% interest rate over 48 months, Alaska’s governor would pay $1,052 a month for her auto loan payment.