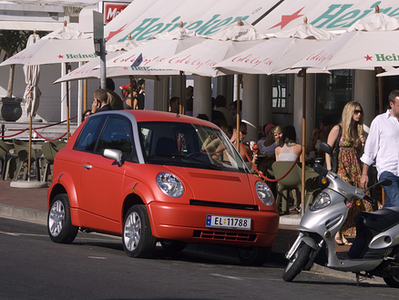 The U.S. will be getting an all-electric car in 2009. The car is called the Think City and is manufactured by a Norwegian company called Think Global AS.

U.S. venture capital investors have backed the company in this endeavor. These same investors helped build Silicon Valley, according to the Wall Street Journal.

The petite car is said to be able to go as many as 110 miles on a full charge and is slated to cost less than $25,000. Drivers simply plug it back in at night to recharge the battery. Think Global AS is looking for a site in the U.S. and Mexico to assemble the vehicle.

The company aims to target bigger cities with dense populations because of the car’s limited range, hence the car’s name. When the Think City arrives in our country, car buyers will be able to get it equipped with three optional, high-powered batteries.

Hey, at least it looks really easy to parallel park the thing and you’ll never have to go to a gas station unless you need to put air in the tires. Not too shabby.