A long time ago, The Simpsons parodied Detroit’s struggle to keep pace with overseas car companies.  Homer’s half-brother, a Detroit auto executive, allowed him to have free reign in his design of the quintessential American car.  Because he believed Homer to be an “average American”, his half-brother thought he would design the perfect car for the people.  The result?  A retro-finned abomination with a sound-proofed back bubble for unruly children (complete with restraints and muzzles, if so inclined) and three huge horns that play “la cucaracha”.  The $82,000 disaster ruins the fictional Powell motors.

Likewise, the thought that radically innovative car designs from Detroit will leapfrog the Big Three ahead of Asian carmakers may ultimately result in the demise of a major American car company.  By placing all their eggs in the “green” basket, the company may well pull a Homer and doom the entire operation.  Only this time it will play out in real life. 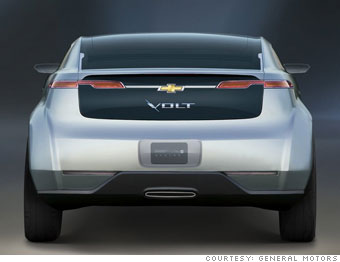 Consider the Chevy Volt. In the first part a CNN Money article on Tuesday, the Web site openly criticized the philosophy behind General Motor’s cavalier reliance on the highly touted electric car, which will sport a nearly $40,000 price tag.  Federal tax credits may reduce the sticker price to about $30K, but even so, this feisty Prius-wannabe is a profit margin nightmare.  And at $40k, that car better have a horn that plays “la cucaracha” as well.

I commend American carmakers for thinking long term with their prototypes of electric cars, but they should be focusing on short-term solutions to their problems instead.  The Volt may be a great marketing icon at present, but the profit margin on this bells and whistles hybrid (which will only make it 40 miles before it has to kick in the old fashioned internal combustion engine) is not worth the investment cost.  With faltering sales threatening an imminent Detroit shutdown, shouldn’t the Big Three be focusing on more direct methods of increasing revenue?

You can view the entire CNN article here.